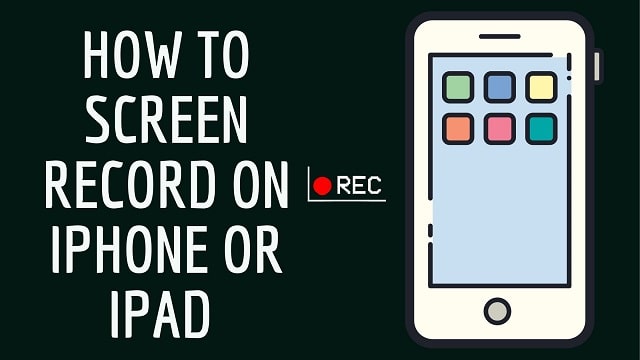 Creative minds generate creative ideas, so we want to capture our creativity. Let’s assume if you do something on your iPhone like play games or design artwork and you want to help your friend to pass the level of the game, or he will also design the same artwork then you need to record your iPhone screen, then you will search how to capture your iPhone Screen over the internet. So in this article, you learn How to Screen Record on iPhone, iPad, iPod. Here we discuss about 5 Best Screen Recorder for iPhone or iPad.

iPhone is a Mobile device that is used by millions of people entire this world.iPhone allows its users to record their screens with an inbuilt screen recorder. Here you should know that some apps do not allow to capture their interface, so you can’t record that app. You can also use third-party apps for screen recording on your iPhone.

What should you know before screen recording on iPhone?

How to add Screen Record button in Control Center

1. Open Settings on your iPhone

3.Scroll down and tap on +Screen Recording(Tap on More Control or Customize Control(according to your iOS) if direct option not available)

Before recording your iPhone screen, make sure your iOS run on at least iOS11 or above. You had already added a screen recording button in the control center, and also your iPhone has sufficient space to store the file. If you want to record your screen without interrupting then please on the Do Not Disturb. Note-> This process is similar for both iPhone and Pad.

1. Play Games or open a website or anything You want to record.

3. Before start recording, Touch and hold the gray Record button, tap on the microphone to turn your microphone on/off.

4. Tap on Start Recording, then wait for the three-second countdown. To exit the screen, Tap anywhere on the screen, then tap the next screen to close the Control Center.

Note-> You can see your screen recording in photos app.

If you ever record your computer screen, you may recognize the Camtasia from TechSmith. TechSmith capture allows you to record, not only your screen, but like other apps, it will record your microphone so you can add narration or voice-overs to your videos. Recordings videos are save in a well-organized library in the app where you can edit, delete, and share them. If you’re using Camtasia on your Pc or Laptop, you can also share your videos directly from your iPhone/iPad to your computer without ever leaving the app.

Record It! screen recorder allows you to record your screen and audio at the same time, but it also allows you to record your front camera to capture your reactions to the screen. It will be helpful if you’re creating videos for YouTube or other social media sites like Instagram because it will allow your viewers to see your face while you’re talking, and see your screen simultaneously. You can also import old recordings from your video library and add video reactions, audio narrations, and other annotations to them.

You can record or broadcast your screen to various types of platforms like Facebook, YouTube, Twitch. Screen recorder Livestream has a powerful video editor that allows you to crop, trim, or merge your video recordings. If you want to add your watermark to your videos, this app will allow you to create a custom watermark. Also, it has a whiteboard feature, that is great for showcasing your drawing and painting skills.

If you are searching for a free Screen Recorder with a face cam and audio with a video editor then you may like this screen recorder. it allows its user to add filters and music and an AD-FREE experience with No Watermarks. After recording, you can crop, trim, or adjust the speed of your video. make your video more engaging with rich text, filters, effects, and music. Add image, shape, and sticker overlays. In this app, you can hide your information using the blur tool. You can also Import any clips to edit, combine, face cam reaction, and more.

Q1.How do I turn on Screen Recording?

Ans->to turn on screen recording, open control center from the pull-down your iPhone screen, and tap on the Screen Recording icon.

Q2.Can you screen record on iPhone without an app?

Q4.How do I record video and audio on my iPhone?

Ans-> To record video and audio on your iPhone do these steps: Open control center>Touch and hold the gray Record button, tap on the microphone to turn your microphone on>Tap on Start recording.

Q5.Why did my screen record not save?

Ans-> it may be possible your storage is full, Delete unnecessary files from storage and again record your video and check the photos directory to view the recorded files.

Antivirus Apps browsers with vpn Create A Poll Discord Facebook Google Docs How To How to Clear Calendar Virus iPhone How to Delete a page in google docs How To Delete Youtube Video How to edit PDF for free How to find my AirPods How to get dark mode on Snapchat How To Make a Poll on Facebook How to turn off windows defender iPhone IPL Ipl Live Poll techfixe.com Techfixer Tools Windows10 Youtube